“Exploring” is an exhibition that, quite literally, explores the human form through abstraction and material manipulation. It remains up through June 23 with a closing reception on June 22.

Griffin’s life is a myriad of moving parts. She’s a stylist, an automotive painter, an art teacher, and a yoga instructor as well as an artist, but for her, everything is related. Griffin draws inspiration from everything around her, from physics podcasts to the students she teaches.

We caught up with Griffin last week.

1. Tell me about your exhibition.

I think it’s confusing for people, because there seems to be this idea of if you’re an artist and you have a show, it has to be all one thing, like variations on a theme. It’s easier for the audience to understand. “Here’s a show about circles! Here’s one circle, two circles, here’s one in purple!” That’s great and that’s awesome when you as an artist have the energy to devote on diving into a subject matter that lights your fire. But for me lately, I’m all over the place. I’m so inspired and excited by everything. I really am trying to figure out how the materials work with one another. I’m trying to pull pieces apart, almost like a sculptor. I’m working within the parameters of finding what works and what doesn’t.

For this show, I didn’t go into making a body of work to have the show. I was just making work because that’s what my hands have to do. I have to make work.

2. You’ve been working with Jerome Meadows in his studio. What’s that been like?

We worked together with Deep, we’re both teaching artists. We met each other through that and we’re very much kindred spirits. He’s into meditation arts--you just know when you click with someone.

He invited me to work in his studio and I’ve been working with him since last July. It’s been phenomenal. There’s this great energy without us even talking much. We didn’t interact a lot but we were sharing similar space, and our ideas somehow influenced each other. We’d start to talk about things we were doing. I think that space definitely influenced what I’m making.

3. What inspires you lately?

There’s this Italian physicist, Carlo Rovelli, and his book [“Seven Brief Lessons on Physics”] is a New York Times bestseller. He was saying all of reality is interaction, and that’s really big. Us talking right now is an interaction; it’s our real reality. Me mixing hummus with toilet paper and latex and finding out of those bind together, is that an interaction?

I’ve been exploring materials kinetically and seeing what’s underneath it. A lot of times, I see faces, but I don’t know exactly who I’m seeing until sometimes way afterwards. 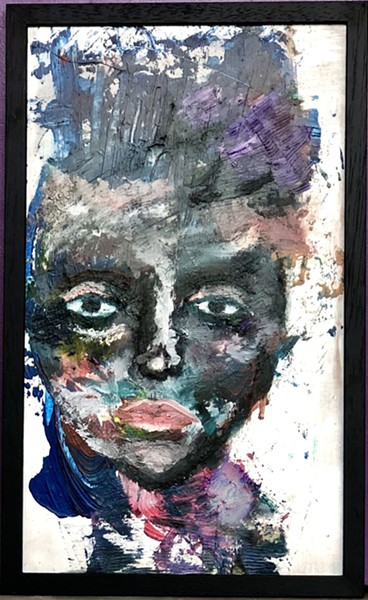 4. Do the faces ever turn out to be you?

I feel like I always have a self-portrait. I don’t think you can do a show that is completely not about you. Making art just for you is very selfish. I don’t mean that negatively--the word selfish has a bad connotation. The way I’m using art to serve myself is to explore a different part of myself. Your mind is a constant narrative and movie, and you are silent but you’re watching it and listening to it.

This might be the yoga in me, but I’m listening to what my paintings are saying to me, I’m being guided. If I’m working on a mountain, and all of a sudden my hand moves a certain way, or I pick up a color that doesn’t work, or I’m using a palette knife instead of a brush, instead of me saying immediately, “That’s wrong, I did a bad job, I messed up, let me redo it,” I’m like, “Well, what is that mountain saying? How is it interacting?” I question what made me use that imagery and see what I can learn from it from where my mind is going.

I’m not Leonardo da Vinci, but I’m not trying to be--none of us can be! But that’s why we write our names into our desks. We want to make our mark that we were here. It’s your signature coming from your hand. No one else can make that like you do.

5. How does yoga influence your art?

It’s all the same. It’s all art. Most of the time, I like to work on the floor. I had drafting tables and easels, but I’m always moving and I’m very into trying to remain present with my body and letting things move through me. It gives me a reason to move around, so I’m working on four different things at the same time.

One thing I feel confident about saying I’m good at is color. I understand color. I look at a color and 95 percent of the time I can mix a color and make that same one on the first try without thinking about it. I didn’t realize that was a skill until recently. I’ve been teaching to Deep and talked to the kids about color theory and mixing color. They can’t take paint out of a tube and put it on a canvas--every color has to be a mixture of at least three. That’s my only rule.

Working [with Deep] has given me so much confidence. They’re youth, but they’re in high school, and they make you be really real. They’re so vulnerable and great that if you come to them with anything that isn’t 100%, they’ll see straight through you. It’s really intimidating. What do I have to teach them? What do I have to say? On a very small level, teaching these kids about color theory, I took it for granted that that was such a privilege.

Accompanied by refreshments and entertainment by DJ Jose Ray.