Man, this rare trifecta win has got it all: Sex, drugs, corruption, coverup.

Just as Savannah was beginning to get over the trauma of the disastrous tenure of disgraced former Savannah City Manager Rochelle Small-Toney, another concussion to the system came, seemingly out of the blue: The sudden fall from grace and resignation of Savannah/Chatham Police Chief Willie Lovett. 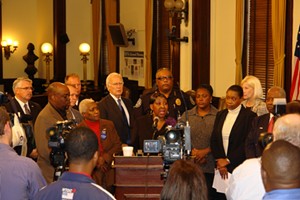 Unlike the case with Small-Toney—a fairly recent arrival to town with a known spotty record elsewhere—Lovett’s whole appeal when promoted from major to chief was that he was a known quantity, a long-time local fixture who deserved his chance after a lifetime of faithful service, finally emerging from under the shadow of previous chief and media lightning rod Michael Berkow.

But how actually unknown a quantity Lovett was became apparent in an exhaustively detailed independent report last year alleging that several members of the Counter Narcotics Team—comprising regular police officers rotated on and off—were aiding and abetting major drug dealers in town, possibly with the collusion of Chief Lovett himself.

In retrospect and a bit more speculatively, perhaps it was exactly that long-time local aspect which allegedly enabled Lovett to develop the contacts and clout necessary to run a seemingly functional police department while possibly at the same time protecting drug shipments to Savannah streets—streets which those drugs made even more dangerous for the vast majority of officers who weren’t involved in the criminal activity.

Not to mention long-beleaguered citizenry living in drug-infested hellholes.

Also swirling around the report are nearly a dozen lawsuits against the city alleging harassment and wrongful termination against employees, some of them former police, who objected to what was apparently the standard way of doing business at the time.

Lovett quickly resigned last September with full pension, replaced by Interim Chief Julie Tolbert. The two cops mentioned in the report as being apparently suspiciously close to the drug trade were fired and face criminal prosecution.

Of course, Savannah being Savannah, the stated reason for Lovett’s resignation had less to do with the report than with a sexual harassment lawsuit involving a female officer married to another Savannah cop.

The start of a promised “national search” for a new chief was delayed until March. City Manager Stephanie Cutter wants it concluded by September—a year after Lovett’s sudden departure.

Just last week, a fairly brief “final report” was issued by the same Virginia-based outside firm that did the original police department audit.

The report made a fair number of good points, but its conclusion probably won’t surprise you: That the recent upper-level changes at the department will probably suffice as far as major changes go.

As for the general public, Savannah’s reaction to the far-reaching scandal involving the most serious issues facing the city was to... pretty much yawn and hold no one accountable. And that to many minds remains the “chief” conundrum. —Jim Morekis
Runner-up, Scandal: Paula Deen
Runner-up, Screw-up: City Manager
Runner-up, Crime Story: Amber DeLoach murder

The Connect Community Editor advocates for good government and responsible activism in her weekly “gossip column with a conscience,” The (Civil) Society Column.

After 22 years in Congress, this Republican stalwart took a shot at the U.S. Senate. (That’s him on the right; Georgia fans might recognize the dude wearing #34 in the middle.) The Republican primary election was literally the day after we went to press. If Kingston didn’t win, he’ll be ineligible for this award next year for the first time. If he did... he’ll still have November to get through, against likely Democratic nominee Michelle Nunn.

The outspoken but always-genial manager of Club One doesn’t shy away from saying what’s on his mind, or what’s important. Always with a smile!

With all the controversy beginning to swirl around the local Animal Control shelter, the most important thing to know about this year’s Best Nonprofit is they are not a shelter.

Coastal Pet Rescue is an all-volunteer group that’s all about finding a home for homeless pets throughout Chatham and Effingham Counties. Numerous events throughout the year raise money for this worthy organization—please help patronize those events if you can!

Still, since the program launched in the bitter cold of late January, more than 1,000 trips around the National Landmark Historic District have been made by CAT Bike. The station in Ellis Square, which is a collaboration between CAT and the City of Savannah’s Department of Mobility and Parking Services, is especially popular with tourists. Travellers who have used bike-sharing systems in other cities instinctively check out bicycles and explore the city, like the German tourist who arrived at last month’s Earth Day Festival in Forsyth Park via CAT Bike, as if it was a completely natural thing to do. Because it was!

Expansion has always been part of the plan and CAT officials are evaluating locations for additional stations and courting potential partners. As stations and bikes are added to the system, its usefulness will increase correspondingly.

There’s a transportation sweet spot for which CAT Bikes are the perfect vehicle: meetings or errands that are just a little farther away than you’d want to walk, but too close to justify driving (and searching for parking).

Downtown workers and residents should check out one lesser known feature, an integrated lock that makes it easy to secure the bike when not docked at a station.

SCAD students should also get hip to another fact that’s not widely known: They qualify for a 50 percent discount on the already bargain priced $60 annual membership, which allows unlimited use of the bikes for up to two hours at a time.—John Bennett

Like any good PR person, the City of Savannah’s Public Information Director would first like you to know that “I don’t mean to second guess your readers, but they could have chosen someone better than me.”

“There are a ton of unsung heroes here, who show up every day and work their butt off. You never hear about them because they keep our system running so smoothly,” says Bret Bell.

Case in point: The day we chatted with Bret about his big win, he had just done some TV interviews about the tragic accidental death of City maintenance mechanic Bounpheng Sriratanakoul at the President Street waste treatment plant.

“I was explaining his job to the reporters, saying that where he worked is cleaning and servicing the area where the bulk of Savannah’s solid waste is processed,” Bell says, urging me to use my imagination about what Mr. Sriratanakoul was literally up to his boots in most of the time. “How much money would they have to pay you to do that every day?”

Journalists around town have a love/hate relationship with Bell because of his background: Once the hot-shot city politics reporter for the Savannah Morning News, Bell accepted a job offer with—“sold out” would be an editor’s description— “the other side,” i.e., public relations, in 2006 during the Otis Johnson administration.

“I came to Savannah in 2000 thinking I’d hit this for three years and move onto the next biggest market. You know the deal in journalism,” explains the 40-year-old Massachusetts native. “At some point I had to make a choice: Do I choose this profession and move up within this profession, or choose the community? I chose Savannah. I don’t regret that. ”

“Chris actually recruited me. I had covered the City with the Morning News for a couple of years. He and I got to know each other. I really respected what was going on at that level at the time,” Bell says. “Of course, like any organization, it’s fallible. But I always feel like the employees of the City are trying to do the right things for everyone.”

Bell says it’s a particularly exciting time to be working for a City government.

“Looking around all across the country these days, you quickly see that all the action is really at the municipal level. You see the real rise of mayors across the nation as important forces,” he says. “I think most people see now that the federal level is pretty much broken.”

As far as dishing dirt on his bosses, Bell is artful in his response.

“I think the non-partisan nature of local elections, written into the charter long ago, has proven to be very wise. Plus politicians in Savannah are so individualistic anyway—they really transcend party label,” he says. “The important thing at the local level isn’t partisan ideology, but getting things done.” —Jim Morekis

Yup, in Savannah the mayor is one vote out of nine on City Council. Other than running the meetings, a Savannah mayor really doesn’t have that much more power than other City Council members. That said, Madame Mayor gets high points for being her cheery self and getting out and about in the community more often than just about any of her predecessors.

The outspoken commissioner for the West Chatham district has a rep for speaking his mind and doesn’t hesitate to be the only one voting a certain way on principle.

Everybody loves a firefighter. Nobody complains about a firefighter. If Connect Savannah had it all to do over again, we’d probably all become firemen. And firewomen. But we digress.

This year’s Best Firefighter began his career with Savannah Fire & Emergency Services in August 2005. Currently driver/operator of Engine 2 “B” Shift at the Lorwood Station, Dickens is on the Regional Hazmat Response Team. The Georgia Southern grad and wife, Elisa have 2 kids.

Dickens says he became a firefighter “because of a strong desire to help people.” He enjoys “the camaraderie of the fire service and looks forward to continuing to advance through the ranks.”—Jim Morekis

This SAV native earned his bachelor’s in Criminal Justice from Armstrong Atlantic and began his career with Savannah-Chatham Metro Police in 2005. He’s been involved with specialized task units including Downtown Special Operations and TRAP (Vice). He spent 4.5 years working with the Chatham/Savannah Counter Narcotics Team and was promoted from CNT Major Case to Sergeant in 2013. He’s now at the West Chatham precinct heading up their Crime Suppression Unit (CSU).

Saving lives out there, people!

This will be the swan song for Dr. Buck in the Best of Savannah competition—or at least in this category anyway. The long-time AASU administrator and just all around great dude has finished out his two allowed terms as Savannah/Chatham School Board President. The election to replace him happened literally the day after we went to press for this issue.

This popular Superior Court Judge is a Georgia native and Savannah resident since 1982. She also serves on a lot of local boards—we believe the legal term is “a crap ton.”