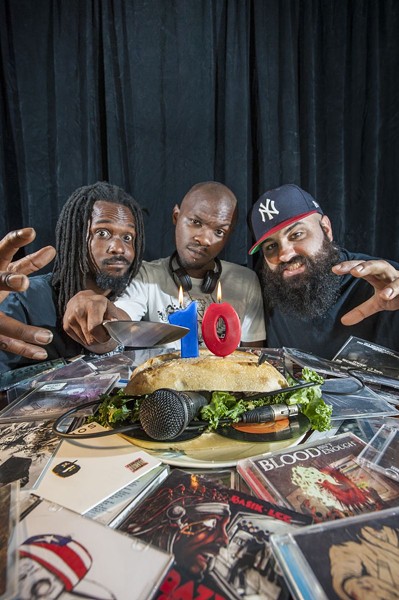 A LOT can happen in a decade.

It’s wild to think that, just ten years ago, Dope Sandwich was a group of eager, young college kids sharing the stage and recording on their laptops, printing stickers with their iconic logo and plastering them all over town.

And while Steve Baumgardner (Basik Lee), Kedrick Mack (Dope KNife), and Max Lipson (Miggs Son Daddy) have spent that time coming into their own as artists, humans, and businessmen, ten years in is just the cusp of a new generation of Dope.

If you follow the Facebook page, you may have noticed a recent name change from “Dope Sandwich” to “Dope Sandwich Records & Tapes”—in this current iteration, Dope Sandwich has eased away from its affiliation as a rap crew to focus on being a thriving indie label for artists of all genres and mediums.

“It’s not a reinvention,” Miggs tells Connect. “It’s just a continuation, a revival.”

“When you think of Dope Sandwich, you’re not thinking of Wu-Tang,” Mack adds. “You’re thinking of a label, a definite brand of music.”

The majority of the original Dope Sandwich crew met in the dorms at SCAD.

“To be honest, that’s what’s responsible for us having as much success as we had out the gate,” says Mack. “We were either freshly dropped out, freshly enrolled, taking a break, just graduated: it was one of those four things. Whenever we did shows, it’d be lines out the door.”

Mack says that, at the time, Savannah’s scene worked like a blank canvas.

“We’re in a bubble enough in Savannah to where we never really had anything to be influenced by, other than what each of us was doing or into,” he explains. “There wasn’t some big, homie-type scene—‘we need to get in with that crowd,’ ‘this style’s popular here or locally.’ We were all our own inspiration. We didn’t have any idea of how to structure a label and put it out—it was just a bunch of 21, 25-year-old rappers who have egos! So we all did our shows together onstage, and people were like, ‘Oh, Dope Sandwich is a rap group.’”

Baumgardner first realized a need for a label when the crew opened for Psyche Origami at The Jinx. The Atlanta indie hip-hop trio was blown away by Dope Sandwich’s opening performance; when an impressed member sought Baumgardner out to find out what label Dope Sandwich was on, Baumgardner was speechless.

“Before we were a label, we were just [recording] stuff because Blue Collar had a studio,” he recounts.

Around that time, Mack dropped out of SCAD to move to South Africa and work for the State Department like his father. Before departing, he invited any and all crew members to come over to his place and record a mixtape using just his computer mic.

“We made the first Pillage mixtape—I think we burned like 50 copies and handed it out on my last night in town,” he remembers. “I went to South Africa for three, four months, and Basik Lee hit me up saying, ‘Hey man, I think you need to come back down here.’”

The mix had taken off, and fans were demanding more.

“This is around the time of the early 2000s,” Mack adds. “So it’s like, you got Rhymester, these indie underground labels, and it was like, ‘there’s no reason we can’t do that. We have a good enough scene in Savannah where we can get something like that poppin’.’”

2005 to 2008 were huge years for the crew, full of touring and opening up for artists they’d grown up listening to.

Baumgardner focused on his DJ career and solo acoustic work; Mack moved to Jacksonville for a year.

At the time, Word of Mouth, the musical ensemble Miggs was in, invited KidSyc and Mack to perform on a remix track.

Miggs had been attending The Jinx’s Hip-Hop Night, hosted by Basik Lee, for years, but the remix project was the first time he and Mack truly connected; the collaboration led to Mack inviting Miggs to join Dope Sandwich and tour as a duo.

“We went on a streak in 2012,” says Mack. “I put out Blackmale, The Under Influence. I started getting serious about making videos a regular thing. And that’s just stuff I was doing personally, second chance type shit. It was like, ‘let’s round up this Dope Sandwich shit and make a label.’ It was to a point that I spent my entire 20s helping build that name up—there’s no reason to forget about it.”

It’s decidedly a different world now than the one Dope Sandwich began in. Videos, shot on Mack’s secondhand camera, are now a staple due to the huge influence of social media (“People will watch a YouTube link before they’ll click on any Bandcamp or Soundcloud,” Mack observes).

In their favor, there’s a renewed interest in well-written, thought-provoking verse.

“It’s so weird to phrase it like this, but the art of rapping is kind of becoming important to rap again,” says Miggs. “And it’s been a long time.”

Baumgardner points it all back to the inauguration of President Obama.

“Motherfuckers started caring about rhymes when we got a black president,” he states flatly.

“There was a joke that Donald Glover made—‘I love being a black geek, because it wasn’t legal until about 2007.’ And he’s right! Around that time, everybody was gangsta partying. Having intelligence and rapping...it just became the thing where that wasn’t the cool shit. Now they say”—he slips into his best holier-than-thou falsetto—“‘I think it’s time, especially now, for black people in America, with us having a president...I think what you saying, people need to hear right now.’ And I’m like, ‘Get the fuck out of my face! I’ve been saying this since 2005. Now it’s cool?’”

“Again,” the closing track of 2006 release The Walking Stick, is a perfect example of Dope Sandwich’s lasting relevance.

“It samples Bernie Sanders talking about the Iraq War!” says Miggs. “We’ve been on this tip. It should be re-released, because it’s as relevant now as it was then!”

“I have all of my political beliefs,” adds Mack. “And I express that through hip-hop. From that standpoint, our brand of hip-hop is definitely a cultural sort of hip-hop brand.”

“We came up in an era where being unique was so valuable,” Miggs says. “That’s what made you dope.”

The trio attest that, though they’re able to celebrate longevity, getting through to Savannah audiences hasn’t always been easy. Baumgardner notes a significant change after the highly-publicized shooting of young local rapper Camoflauge in 2003.

“Hip-hop went back to being, in the eyes of certain people, this negative thing,” he remembers.

The association—and folks' transparent racism—made it difficult to book shows and expand to new venues; from the initial utterance of “hip-hop,” Baumgardner could sense a wall going up when talking to venue owners.

“I said, ‘Hello, I’m Steven Baumgardner, and I’ve hosted Hip-Hop Night for several years without any violence,’” he says. “I even had to check myself later for that—why do I have to say this? The roots of hip-hop are about nonviolence.”

Baumgardner says that, while it can still be a struggle in 2015, he tries to see people’s reservations as a starting point to create healthy dialogue.

“I look at it as, oh, cool. This gives us a reason to have a conversation, because you’re believing in an image. Let’s get past this image and talk. But we’re fighting it constantly. The shit we’re starting as a crew, they’re discussion pieces—they’re opening up conversations. There’s nobody in the crew who’s dropping an album that hasn’t started a conversation.”

Because, at its core, through all changes, unrestricted by genre, Dope Sandwich is a label, a group, of thought-provokers.

They’re involved in their community—they work with youth, teach classes, and keep the conversation going, all while encouraging individuality in each of their artists.

“The first time that I realize any two projects sound alike, I’m going back to the drawing board,” says Mack.

“That’s not what we’re trying to do. It’s not ‘What kind of artist are you?’ It’s ‘What do you want to say on this project?’”

It's been a huge summer of plans and new releases, including, most recently, Basik Lee's stunning first LP in years, Crazy Shit. There’s plenty on the horizon for the label—while they can’t discuss all of it just yet, they disclose a sampling of future releases: an EP from Basik Lee and original crew member Blue Collar, featuring Shawntel Foster as narrator; Lizard Girl, an EP from newly-signed spoken word poet Valore and Obamabo; an EP from Happy Thoughts (Miggs and Dope KNife); Sunset, Miggs’ second solo LP; 1984, Dope KNife’s fourth solo album; a full-length from Cult Cyph, and solo projects from both its members. And those are just the releases they’re able to talk about.

There are plenty of opportunities to continue the birthday celebration throughout the month—check out the latest releases at dopesandwich.com, and on Sept. 18, hit their day showcase at Blowin’ Smoke and evening blowout at The Jinx.

It’s guaranteed to be a packed day, but Dope Sandwich wouldn’t have it any other way—they want to continue to celebrate and reach their Savannah community in every way possible.

“When we do tours, we don’t go out there and say, ‘Hey, I’m Dope KNife from Virginia, I’m Miggs Son Daddy from New York,” says Mack.