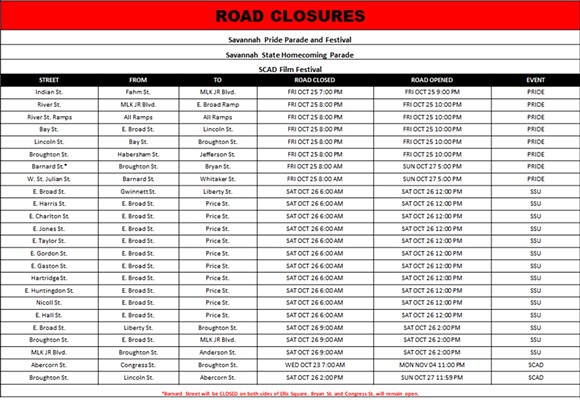 The SSU Homecoming Parade runs from 9 a.m. Saturday through about 1:30 p.m. The parade route runs from East Broad to Broughton Street to MLK Jr. Boulevard.

The parade Staging Area on East Broad Street will be closed from 6 a.m. on, with route closure starting at 8:45 a.m.

The Savannah Pride Festival features a parade beginning 8 p.m. Friday evening along River Street and Broughton Street, concluding in Ellis Square. From 8 a.m.-midnight Friday, Barnard from W. Bryan to Broughton (Including both sides of Ellis) and St. Julian from Whitaker to Barnard will be closed.

On Saturday, Pride continues from 10 a.m.-midnight in Ellis Square. Barnard from w Bryan to Broughton (Including both sides of Ellis) and St. Julian from Whitaker to Barnard will be closed.

Portions of Broughton Street and Abercorn streets will be closed Oct. 26 after the SSU Parade until midnight, and evenings throughout the Film Festival until its conclusion the following weekend.

The Savannah Speed Classic happens on Hutchinson Island through Sunday. Vehicles will be heard throughout the downtown area.

First Responder Appreciation Luncheon to be held today at 11 a.m.

ELECTION 2019: Eddie DeLoach, Tony Thomas headed to runoffs; incumbents lose across the board

Mayor Johnson: 'We are prepared to defend our position' to require masks in Savannah despite Governor's order