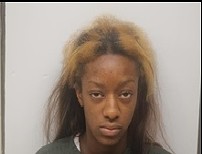 Diamond Butler, still at large
Savannah-Chatham Metropolitan Police Violent Crimes detectives have charged two suspects, "as one remains at large in an October homicide that claimed the lives of Kiana Marshall, 21, Alexis Kitchens, 19, and Isaiah Martin, 18, in a residence on the 800 block of Lynah Street," police say.

On Monday and Tuesday, James Angelo Hampton, 22, and Dwayne Leonard Abney, 18, were served warrants at the Chatham County Detention Center, where they were serving time on unrelated charges.

"Warrants also have been obtained for Diamond Butler, 18, who remains at large. Each suspect faces numerous charges to include felony murder," police say.

Butler is described as a black female, who stands 5-6 and weighs roughly 110 pounds.

"On Oct. 22, at about 8:17 a.m. Metro responded to reports of an open door at the Lynah Street residence. While checking the property officers found Marshall, Kitchens and Martin deceased, with gunshot wounds inside of the house. Investigators believe the shootings stemmed from an ongoing tenant’s dispute between Marshall and Butler," police say.

This investigation is a collaboration between SCMPD and the FBI’s Violent Crimes Task Force.

Investigation ordered into death of man at Skidaway State Park

WRUU Spotlight: 'We the People'

ELECTION 2019: Eddie DeLoach, Tony Thomas headed to runoffs; incumbents lose across the board

Mayor Johnson: 'We are prepared to defend our position' to require masks in Savannah despite Governor's order