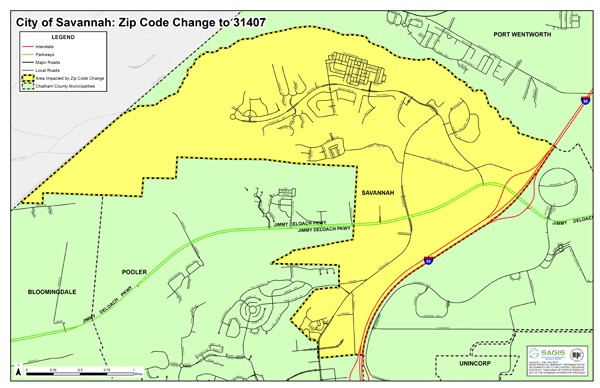 After lobbying by the City of Savannah, the U.S. Postal Service has agreed to change mailing addresses "to acknowledge that residents living in and around The Highlands community off Jimmy DeLoach Parkway reside in Savannah rather than Pooler," a City of Savannah spokesperson says.

Beginning July 1, neighborhoods in The Highlands and subdivisions running along Benton Boulevard to just north of the Pooler Parkway will switch from a Pooler, GA 31322 address to a Savannah, GA 31407 address. These areas have been located in the City of Savannah since their development, but incorrectly identified by the Postal Service.

“July 1 is our independence day from Pooler,” said Alderman Van Johnson, who represents the area and has fought for the change.

“I am pleased that we were able to partner with the U.S. Postal Service to achieve that result in order to support the fastest-growing area of our city. I commend the City Manager and City staff who worked diligently for so long on this matter.”

To ensure a seamless transition, over the next year the Postal Service will deliver parcels as normal to addresses in this area whether they include the Pooler 31322 or the Savannah 31407 address. Residents should use this period to notify contacts of the zip code change. Residents living in Pooler will continue to use the 31322 zip code as always.

"Residents in The Highlands have complained for years that their mail indicated they lived in Pooler rather than Savannah, where the neighborhoods have been located since the area’s annexation into the City in the late 1990s, when it was still undeveloped timberland," says the City spokespserson.

"This caused confusion when unsuspecting residents attempted to request sanitation, water, sewer and other services. Residents calling 911 sometimes would mistakenly tell emergency personnel they were in Pooler, when they were actually living in Savannah."

The City began working with the Postal Service in 2012 to make the change.

"Such changes are rarely made by the Postal Service, and the City thanks local and regional Postal Service officials for working on a solution. The City of Savannah continues to work with residents on other areas to clarify residency and eliminate confusion," the spokesperson says.

The Postal Service sent letters to residents in affected areas this week, and will follow with more detailed letters over the next month. The City will conduct a series of educational efforts as well to ensure residents are fully informed of the change.